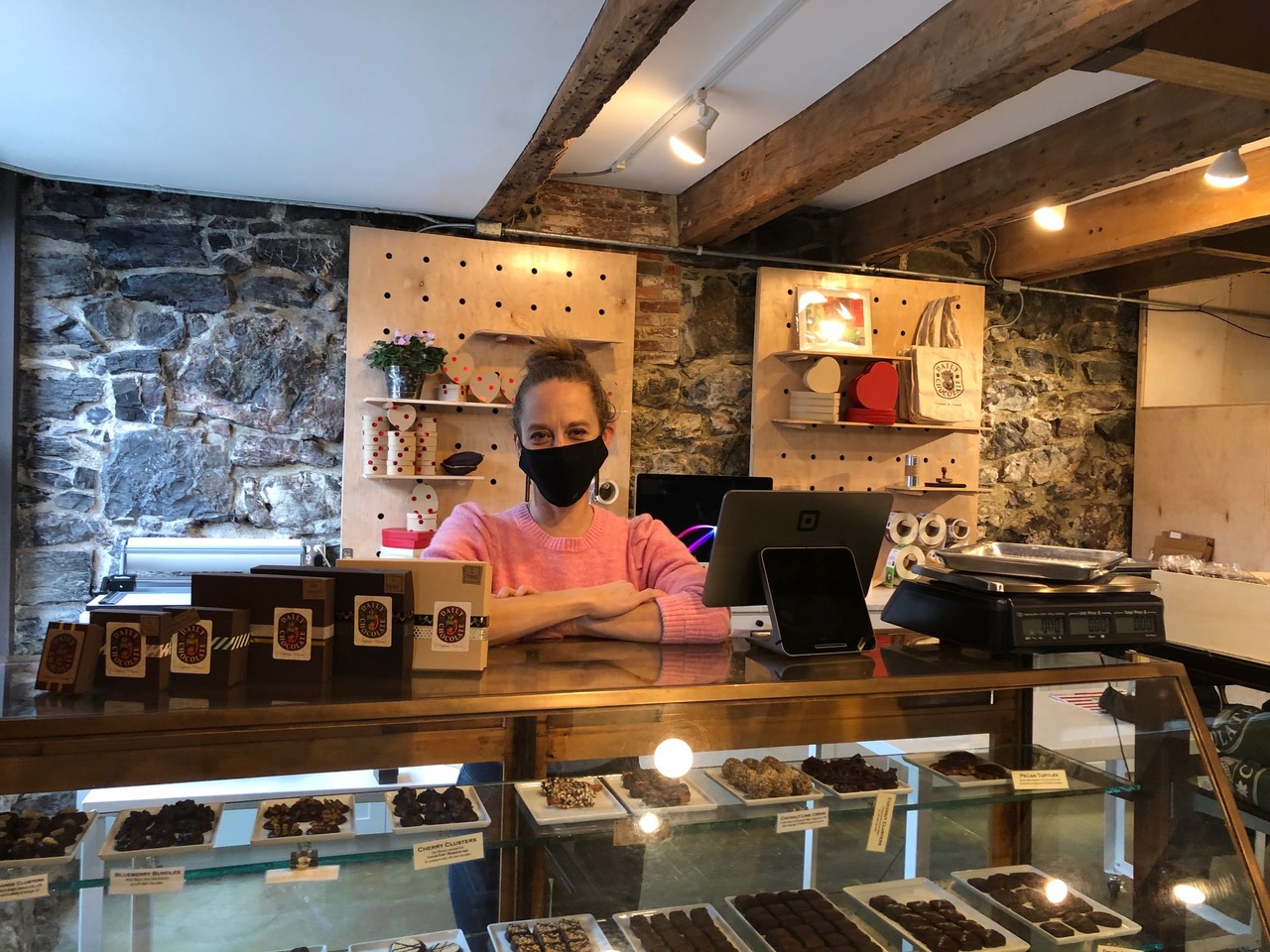 When Dawn Wagner took a job at Lake Champlain Chocolates as a student at the University of Vermont, she had no intention of becoming a chocolatier. Her focus, at the time, was theater. After graduation, Wagner moved to New York City, where she worked as a stage manager for on- and off-Broadway productions for the next 20 years.

But her chocolate-making experience in Vermont sparked a light. In New York City, she took a side job with a chocolatier who supplied chocolates to the Bellagio. “The Chef eventually closed up shop, but by that point I had a passion,” Wagner said. She began making chocolate for friends and family out of her home kitchen.

Over the years, Wagner maintained her connection with Vermont. On trips to visit her mother in Vergennes, she was impressed by the renewed vibrancy of the downtown. So when she and her husband decided it was time to leave the city, Vergennes was a natural choice.

“I’ve always wanted my own shop,” Wagner said. “I knew doing that in New York City was going to be cost prohibitive. Coming back to Vermont, I started trying to prioritize that.” But Vergennes already had a chocolate shop—Daily Chocolate, owned by a family friend, Jen Roberts. So Wagner did the next best thing: she worked at the shop for the next four years, mostly seasonally.

Last spring, when Roberts decided it was time to sell, Wagner was ready to buy. But she wasn’t sure how to start the process. A friend recommended that she connect with Sarah Kearns, an advisor with the Vermont Small Business Development Center (VtSBDC). “The scariest part was reaching out, beyond that it was easy,” Wagner said. “When I found Sarah, I had no idea what exactly I was doing. She helped me find the right people in the right order.”

From employee to owner

Wagner closed on the business on December 1, 2020, and hit the ground running. One of the first things she did was invest in a POS to be able to track inventory and sales. “When I started on Dec. 1, all the product was in there,” she said. “It was a lifesaver.” She’s also been working with an accountant, recommended by Kearns, to become fluent in Quickbooks so she can keep an eye on cash flow. “Right now, I’m a one-person business,” she said, “but when you turn those reins over to someone else, you still need to understand how your business is doing and how your money is being handled.” More recently, Kearns has been keeping Wagner informed about any grants she may be eligible for.

This winter Wagner launched an e-commerce platform, which has been a big hit with customers. Wagner anticipates that other Covid-inspired services, such as Curbside, will continue to be relevant in the future. “People have very easily made the pandemic transition to online ordering and curbside pickup,” she said. “We are open to the public now, two people at a time. I love the interaction with customers, but I think even when we’re maskless and can have people piled in the store, some customers will still be doing curbside because it’s easy.”

Along with expanding her website offerings, she has been using social media to help spread the word. “I took over Instagram long before I purchased the business, but I wasn’t posting regularly,” she said. “It’s free and it works.” Even though the shop has been open for 13 years, she said there are people who are coming in for the first time. For Wagner, that’s a sign her marketing efforts so far are working.

Wagner hasn’t come up for air since the purchase. After a busy winter and spring, with one “chocolate holiday” after another, Wagner looks forward to having time this summer to focus less on operations and more on the business. “Eventually I’ll want to grow and improve processes,” she said. “So I need to start planning for the next phase of this, whatever that might be.”